Aspiring for the Dust of Srimad Rupa Goswami’s Lotus Feet

Srila Rupa Goswami is the mine of the most precious treasure, the leader of the associates of Lord Chaitanya (the Divine Succession being known as the Rupanuga Sampradaya, ‘the followers of Sri Rupa’). In the company of his brothers, he was resplendent in (the province of) Gauda, causing the fervent twin bumblebees in the form of the lotus eyes of Sri Chaitanyadev to drink nectar, as the Lord’s lotus feet moved on the pretext of visiting Vrindavan. When will that Srimad Rupa Prabhu grace me with the dust of his holy feet?

At Sri Ramakeli Dham, the king of bees—the heart of Sri Rupa—became intoxicated drinking the honey-wine of the lotus feet of Sri Gaurachandra, and sacrificed its life (in Hari-kirtana) for the benefit of all the people of the world, summarily abandoning a life of kingly opulence. After informing his elder brother Sri Sanatana, Sri Rupa and his younger brother Sri Vallabha followed the footsteps of Sri Caitanyadev, whose heart was absorbed in going (from Nilachala) to Sri Vrindavan. When will that Sri Rupa Prabhu grace me with the dust of his holy lotus feet?

From the chapter “The Real Judgement of Love” in Heart and Halo:

There is one story I heard from my godbrother Vaikanasa Maharaj, who was a brahmana scholar of Orissa, about an incident which occurred in recent history, in connection with the Jagannatha Temple at Puri, where it was customary that no khechuranna (kitri) used to be offered to the Lord. 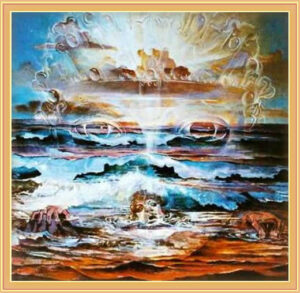 The devotees of the Lord constantly discuss the glories of the Personality of Godhead among themselves. Thus they constantly remember the Lord and remind one another of His qualities and pastimes. In this way, by their devotion to the principles of bhakti-yoga, the devotees please the Personality of Godhead, who takes away from them everything inauspicious. Being purified of all impediments, the devotees awaken to pure love of Godhead, and thus, even within this world, their spiritualized bodies exhibit symptoms of transcendental ecstasy, such as standing of the bodily hairs on end.

The Supreme Personality of Godhead is so kind to the conditioned souls that if they call upon Him by speaking His holy name, even unintentionally or unwillingly, the Lord is inclined to destroy innumerable sinful reactions in their hearts. Therefore, when a devotee who has taken shelter of the Lord’s lotus feet chants the holy name of Krishna with genuine love, the Supreme Personality of Godhead can never give up the heart of such a devotee. One who has thus captured the Supreme Lord within his heart is to be known as bhāgavata-pradhāna, the most exalted devotee of the Lord.

All glories to the feet of Sri Guru, Sri Gaurasundar, Sri Sri Gandharva-Govindasundar, and all of Their associates. They are the fulfillers of all our desires eternally.

I offer my obeisance unto the personified message of Sri Gaura—Sri Gurudev, the golden manifestation of Sri Gaura who is perpetually maddened with the sankirtan of Sri Gaura and who reveals the beauty of the mercy of Sri Gaura.

Of the many ways to chant Krisna’s glories, foremost is His nama-sankirtana. It is deemed the best because it can evoke at once the treasure of pure love for Krisna.

The sankirtana of Krisna’s names is praised as the best and most powerful means to attain the treasure of krisna-prema. It is like a potent mantra that can attract precious objects from a distance.
(Brihad-Bhagavatamrta 2.3.164)

“O Lord, I have no faith in religiosity, economic development, or sense enjoyment. May all these things come to pass as they are ordained according to my previous karma. But my earnest prayer is that birth after birth I may have unflinching devotion for Your lotus feet.”

In his commentary on Saranagati, Srila Bhakti Raksak Sridhar Dev-Goswami Maharaj notes that ‘Sri Nanda Kumar hears their prayers’ means Krishna reciprocates with the surrendered souls in accordance with their prayers. As an example of this, Srila Sridhar Dev Goswami Maharaj cites the following evidence from the scriptures:

[When Vibhishan, the brother of Ravan, prays to Him for shelter, Ram Chandra proclaims before Hanuman and all His devotees:] “Anyone who even once sincerely surrenders unto Me, declares, ‘I am Yours’, and prays for fearlessness — it is My vow that I will always supply that to them.”

The transcendental Pastimes of Sri Krishna

“The transcendental lila of Sri Krsna is great nectar for the ears. Those who relish just a single drop of that nectar even once have their attachment to material duality totally ruined. Many such persons have immediately given up their futile homes and families and have come to Vrndavana like a free bird out of a cage. Becoming totally detached from their material life those devotees have taken up the path of renunciation and have accepted alms just to maintain their lives on this plane. In this way, they continue to search for Him, the complete fulfillment of life.”
(SB 10.47.18)

On this Anniversary of His Divine Grace Srila B.R. Sridhar Maharaj’s passing from this World in 1988, some quotes by his exalted Godbrother, His Holiness, Srila B.P. Puri Maharaj:

—
From the very beginning of Pujyapada Sridhara Maharaja’s matha (ashram) life, his adherence to the devotional services of his own guru, Srila Prabhupada (Srila Bhaktisiddhanta Saraswati Thakur), was super-resplendent.

He would so superbly explain each and every word of Sri Gurudeva [Srila Bhaktisiddhanta] in such an intensely devotional, melodious way that we would be charmed.

Although he was born in a high-class, wealthy family, was handsome, and became famous for his scholarly achievements, no trace of false pride was ever found in his life or character.

We use cookies to ensure that we give you the best experience on our website. If you continue to use this site we will assume that you are happy with it.Ok